It's official: venture capital investing in New England is at a 10+ year high. The latest study from PricewaterhouseCoopers shows venture capitalists invested just over $5 billion in New England startups in 2014, with 93% of the funds going into Massachusetts. This puts us at a little more than 10% of the national total of $48.3 billion invested in 2014, a decline of 5% from 2004 but about even with where we were at pre-Dotcom Bust. This is an increase of $1.8+ billion over 2013 (59% increase), with deal flow up by 4% over the previous year (545 deals). 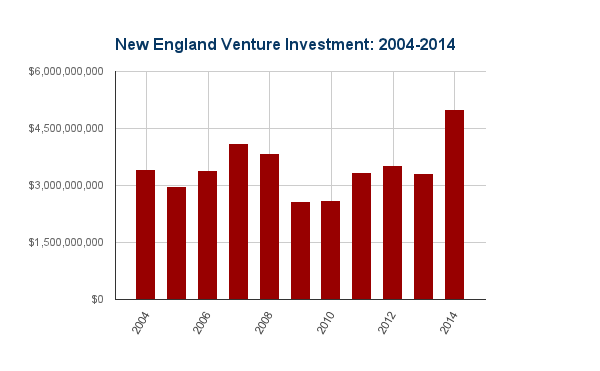 The bad news: this is the first year we didn't take the 2nd place slot to the Silicon Valley, with the New York metro area beating us by a VC hair (~$20 million).

Overall, this is a healthy sign for both the entrepreneurial community and Boston, and reflects what I'm sure we've all been seeing lately. If I lived within 50 miles of Palo Alto though I'd have to ask: is this yet another sign the tech bubble is about to burst? ;)