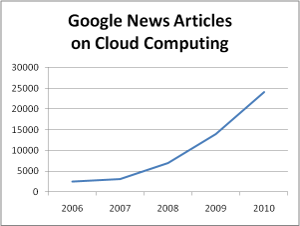 But first, a confession: classifying a company as in or out of the cloud computing market is subjective. It reminds me of classifying Internet companies back in the mid-1990s (does having a web site make you an Internet company?), and is further complicated by the fact companies are scrambling to re-brand themselves with the cloud. If you haven’t noticed, Salesforce.com is now known as “the enterprise cloud computing company”, and Akamai is “the leading provider of cloud optimization services."

So I have adopted a simple rule of thumb: if you think you’re a cloud company, then for the purposes of this top 10 list, I’m going to call you a cloud company.

Nasuni produces Nasuni Filer, a virtual file server that provides unlimited storage, file protection, local performance and fast restore. The product accomplishes this by blending the advantages of on-premise infrastructure with the advantages of cloud storage.  Customers can purchase the Nasuni Filter for a monthly per instance fee, and are charged a variable per GB cost for the cloud storage they use. The product supports Amazon S3, AT&T Snaptic SaaS, Iron Mountain ASP, Nirvanix SDM and Rackspace Cloud Files - and soon Microsoft Azure.

Nasuni was co-founded by Andres Rodriguez, former founder and CTO of Archivas (bought by Hitachi) and co-founder and VP of engineering of Abuzz (bought by the NY Times). They are backed by North Bridge and Sigma.

Why you should watch them: simple value proposition, strong management team, strong board

Sonian was founded by George Nichols, former VP for Dialogic Communications, and Greg Arnette, former founder and CTO of IntelliReach (acquired by Infocrossing). They are backed by Prism and Summerhill.

Why you should watch them: growth market, potential for horizontal archiving play

CloudSwitch provides software bridge that allows enterprises to securely extend their internal network into public cloud. The product allows customers to run existing applications in the cloud without modification, while maintaining full control. The product is priced based on an annual subscription fee based on a maximum number of concurrent virtual machines. Last I checked, they supported Amazon, with plans for other public cloud providers.

The company is backed by Matrix, Atlas and Commonwealth.

Why you should watch them: strong investors and board

Backupify provides a backup and archiving service for social media and SaaS services such as Gmail, Google Docs, Google Calendar, Facebook, and Twitter. They offer a subscription service, priced per month and account, with storage limits per account type. The product is priced for both small businesses and consumers.

The company was founded by Rob May, a Kentucky native who decided to move his startup to Boston after their series A investment this month from Avalon and General Catalyst.

Why you should watch them: simple value proposition, emerging market

Cloudant is the sponsor of the open-sourced elastic database, CouchDB. Their product is competing in the emerging No SQL market, a market driven by the premise that the relational database model cannot meet today’s scalability needs (the TenGen sponored MongoDB is another such database). The company offers a series of database solutions, priced per month, that provide their highly scalable database for both public and private clouds.

Cloudant was founded by two MIT PhD students, Alan Hoffman and Adam Kocoloski. The company is backed by Avalon. I’m not sure whether Alan and Adam worked with Michael Stonebraker at MIT - but as you can imagine, he has something to say about the No SQL movement. Cloudant is a Y Combinator funded company.

Why you should watch them: emerging technology

DynamicOps provided Virtual Resource Manager, IT automation software that allows business units to rapidly create and deploy on-demand IT services for public or private clouds. The product accelerates the delivery of computing resources, optimizes utilization of infrastructure, and minimizes the cost of managing your infrastructure needs.

The company has a somewhat unusual heritage via a spin-out from the Swiss banking giant, Credit Suisse Group. The company CTO and founder, Leslie Muller, was a former founder of Configuresoft and SeNTry (acquired by NetIQ).  The CEO, Rich Krueger, was an EVP at Incipient.

Why you should watch them: market need for multi-vendor management solution

Yotta provides a freemium web site performance and monitoring services that allows you to measure user experience and analyze the impact of performance on your business. There is slick freely available beta version of the product available on their site today, which within a few seconds told me among other things that this page loads faster that 51% of web sites, has average performance, and will take on average 6.782 seconds to load if accessed from Singapore.

Yotta received its first round of financing last month from General Catalyst, Stata and Cambridge West. The founder is Coach Wei, who previously had founded Nexaweb Technologies.

Why you should watch them: simple value proposition

Carbonite provides online backup for small businesses and consumers by installing software that automatically backups up your files to the Internet. The product is priced annually per computer, with all plans providing unlimited storage. If the name sounds familiar to you, it is likely due to their national television marketing blitz that is pretty hard to miss.

The company was co-founded by David Friend, co-founder of a series of local startups (Sonexis, FaxNet, Pilot Software, Computer Pictures Corporation and ARP Instruments) and Jeff Flowers, who was CTO at several local startups. They are backed by a series of investors, including 3i, CommonAngels, Crosslink and Menlo.

I have to confess: Carbonite is not really a cloud company. They use their own infrastructure and data centers for storage instead of leveraging existing cloud storage. They also have had some tough press in 2009 related to planted Amazon reviews and a data loss issue.  But they are growing like gangbusters, with Inc. Magazine naming them one of the ten fastest growing companies.  They call their storage infrastructure "a cloud" - so who am I to argue.

Why you should watch them: market traction

The company was founded by Nicos Vekiarides, a former VP at Incipient and GM at HP, and John Bates, former technology manager for Incipient and Distinguished Technologist at HP. Their funding is undisclosed.

Why you should watch them: emerging market

OfficeDrop provides a document scanning and management solution for small businesses. Customers drop documents in pre-paid envelopes, mail them to OfficeDrop, where they are digitized and made available online. The product is priced per month, with a fixed number of pre-paid envelopes and pages to scan.

The company is founded by Prasad Thammineni and Vikram Kumar, and won a MITX Technology Awards in Innovation in Cloud Computing in 2008.

Why you should watch them: simple value proposition

We all know the center of gravity for cloud computing is in Seattle, Silicon Valley, and southern California. The planetary giants in this emerging market are Amazon, Google, Salesforce.com, and Microsoft. Startups, such as Heroku, Joyent, Eucalyptus, RightScale, and Aptana, have gathered like planetary moons around the giants, and Boston... well, Boston is the Pluto of the cloud solar systems.

But as you can see from our round up, Boston has a few good cloud investment, particularly in Software as a Service and underlying cloud infrastructure. Also, in addition to our startups, we have local cloud investments being made by companies such as EMC, Akamai, Iron Mountain, and even Google and RedHat. But if you believe the cloud is the next world wide web, we can only hope that local entrepreneurs and investors start to pay more attention to this emerging technology, ensuring Boston does not become a technology backwater for cloud computing.