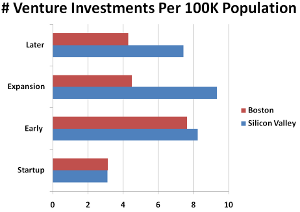 Any time you get enough Boston venture investors and entrepreneurs together, the discussion inevitably turns to a debate on Boston versus the Silicon Valley. Last week’s Future Forward executive retreat at Wellesley College was certainly no exception. The late morning panel discussion, "Changes in the World of Seed-Stage Investing", included venture investors from the Founder Collective, NextView Ventures, Hacker Angels and Kepha Partners, all moderated by David Cancel, founder and CEO of Performable.

The general consensus from the panel and audience was that we have an “investor gap” in Boston that could be solved with greater risk taking from our venture capitalists and private investors. David Frankel, managing partner of the Founder Collective, suggested Boston lagged behind due to a lower density of millionaires. David Cancel felt the local venture capitalists were not replenishing the pond by reinvesting in the next wave of entrepreneurs.  Jo Tango, founder of Kepha Partners, suggested Boston’s data communication DNA may not translate well into the current high tech markets.

With the debate fresh in my mind and a long plane ride en route to the west coast today, I thought I’d attempt to put the "investor gap" hypothesis to the test.

To prove or disprove the theory, I decided to analyze the number of startups in each region using the PricewaterhouseCoopers MoneyTree Report. I adjusted the data for population to arrive at a calculation I call the startup density, which represents the number of venture dollars or deals per unit of population in a region. I then compared the startup densities of the two regions at different stages in financing, with the expectation of seeing a trend to support or refute the “investor gap."

While technically the Silicon Valley refers to the area from south of San Francisco to San Jose, most people generally consider it to encompass the Bay Area (San Francisco, San Jose and their suburbs). This latter definition is consistent with the PricewaterhouseCoopers report, so I used it in my analysis. But depending on who you talk to in Boston, the Silicon Valley can stretch from as far north as Seattle, to as far south as San Diego. ;) Per our definition, the Bay Area has a population of 7.4 million.

The Boston metropolitan area, which stretches along the Massachusetts coast, is the tenth largest metropolitan area in the U.S. with a population of 4.5 million. I had to adjust the PricewaterhouseCoopers report for this definition of the Boston area. So for every 100 people that live in the Bay area, there are approximately 61 people living in the Boston area.

I also used the following definition of investment stage:

So what could possibly explain this sudden drop off of per capita investments in Boston between the early and expansion stages? The following immediate theories come to mind, each highly subjective and in need of further analysis:

It is worth digressing to mention the latest Cambridge Associates report on the return rates for venture capital as an asset class. The analysis of 1,294 venture funds through Q2 2010, shows the 10-year return for venture funds was negative 4.2 percent at the end of the second quarter. This means that $100K invested by a limited partner in a venture fund in 2000 would return $92K in 2010.

The root cause we know is the lack of health in venture exit markets. But it also suggests we are in a time when we should expect venture capitalists to be more not less risk adverse.

The data provides an interesting twist on the old Boston versus Silicon Valley debate.  Many of us like to believe the Mark Zuckerberg’s of the Boston area go west due to shortcoming in our venture investors. Our conventional wisdom is that Boston investors are less willing to take risks than their west coast counterparts. But when you apply data analysis to the problem, it suggests there may be no “investor gap” after all.

I plan to expand the data analysis to cover multiple years to ensure the data adjusts for fluctuations in investing patterns. I also am happy to answer any questions on the methodology.