Last Thursday I attended the Boston Clojure Meetup, an informal gathering of engineers co-sponsored by the two Clojure pioneers in the Boston area: cloud startup Sonian and web accelerator Akamai (via the acquisition of the Florida-based startup Velocitude). The special guest for the event was Phil Hagelberg, hacker, Clojure enthusiast, and founder of the Seattle Clojure Group.

If you have not heard of Clojure, you are likely not alone. The language, developed by Rich Hickey, is just over two years old. Rich had been an active participant in the Common Lisp community for years before developing Clojure, driven by a desire to build a modern Lisp-based lanuage on top of the Java virtual machine. Prior to Clojure, Rich had been best known for dotLisp, a Lisp-like language built on top of Microsoft .NET (for which we forgive him).

Lisp has been around for over 50 years and used primarily in academic and scientific circles. But a confluence of changes in the technology industry - including the growth of cloud computing and an increasing disaffection with the limitations of object oriented programming - opened the door to mainstream adoption of a functional language.

I also will confess to not exactly being a language pioneer. My first job out of school was building a Smalltalk environment at Easel, a decade after the first public version of the language made its way out of the research labs. I then spent more years than I care to admit writing code in C++ before becoming an early adopter of Java 1.0 and then Java’s ugly cousin C#. I left Java to join the Ruby party - but by the time I joined it seemed the balloons and banners were already being pulled down. I only arrived at Clojure by taking the VPE role at Sonian, which adopted the language to build a more efficient cloud-based Dynamo architecture for its archiving solution.

This was the second meetup of local Clojure enthusiasts, with the first at Akamai in January. The format for the evening was an informal hackfest, where the attendees collaborated on solving a problem through group coding. For the first 45 minutes, engineers gathered informally to get their development systems setup. Phil then defined the coding problem for the evening: to write a Clojure interface to Git. Attendees used the wireless from their laptops to access a common emacs session being projected on the screen.

For the first hour or so, the meetup was somewhat fragmented and small groups worked independently. But then a hush came over the room as the attendees began to focus on the code on the screen. Periodically new lines of code would appear, as the attendees began to add code to improve the solution. The event ended with Phil posting the results of the group-think, called QuickBeam, on a public Git repository.

The second Boston Clojure Meetup concluded with positive feedback all around. While the Clojure community still is relatively small in the Boston area, it is expected to grow as technology paradigm shifts drive the adoption of new technologies. Phil also introduced Boston to his unique format for his own Seattle Clojure Group - a format I expect we’ll be using for future meetings. 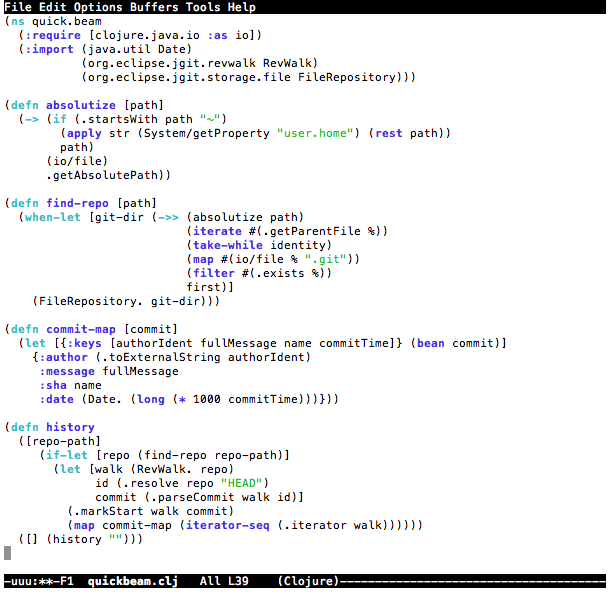