This morning I decided to answer a critical cloud computing question: which cloud sits at the cool kids' table at lunch? A few wgets to Google News later and I had both my answer and a surprise or two.

Amazon Web Services is definitely Most Popular in our cloud computing class. Amazon AWS finished 2006 with 1.3K articles, showing a steady linear growth in popularity each year to 4.4K articles in 2011. But something has clearly happened to its popularity in 2012 (dating the head cloud cheerleader?), as AWS news articles increased 3X, and are on pace to finish the school year leading with 13K articles. 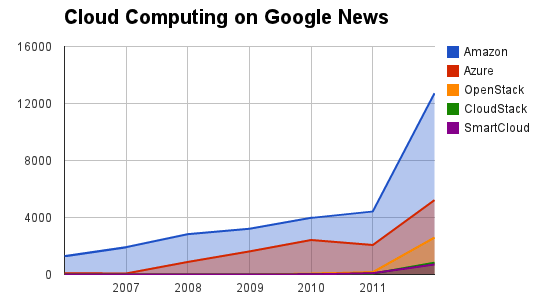 While Microsoft Azure is not sitting at the cool kids' table yet, it is a close second in popularity to AWS. Azure entered the scene in 2008 with 88 news articles, and continued to track to the relative rise of AWS by finishing 2011 at 2K news articles. But it’s almost as if we can hear Azure say: “Marcia, Marcia, Marcia!”

It has only been recently that anyone has noticed IBM SmartCloud and CloudStack in the lunchroom. They came in last in our popularity contest, with 92 and 61 articles respectively in 2011. But both are seeing rapid growth in articles in 2012. Could it be the entire cloud computing class has become more popular this year?

But before I let enthusiasm over the popularity of my cloud computing class run away, I concluded a study is not scientific without a control. In order to ensure my study could withstand the scrutiny of scientific journals, I needed a control everyone agreed would clearly sit at the cool kids' table at lunch. Since pop culture is not my forte (guess which table I sat at?), I asked my wife and she suggested the American actress / personal train wreck Lindsay Lohan.

A few more queries to Google News and I realized how much less cool my cloud computing class looks when Lindsay walks into the lunchroom. Lindsay had 4.7K articles written on her in 2007, exceeding the cumulative total of all clouds that year. Her bad girl popularity continued to outpace the rest of the class, taking a dip in 2011 (sobriety?) before skyrocketing to what is projected to be over 52K articles in 2012. 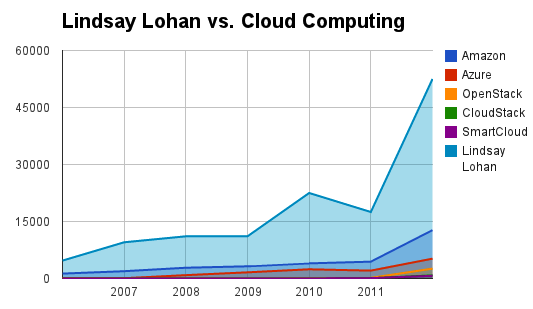 The key conclusions we should take away from my scientific study include: