Cloud computing has socially engineered us to think in terms of consumption based pricing. Whether we are provisioning a terabyte of storage or a virtual core of compute, we expect to pay for only what we use. Unfortunately, this distinctly 21st century thinking has not translated into the support services offered by most clouds today. Providers such as Amazon and IBM price their services based on the classic software maintenance model of the 1980s, resulting in customers paying more for less in cloud support. 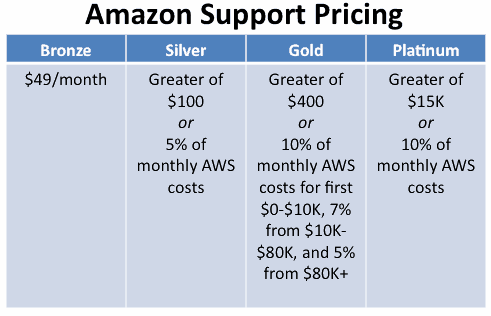 To review what is wrong with cloud support, we’ll use Amazon as an example, since it is both readily recognized as one of the highest quality providers of IaaS services and is a pioneer in consumption based pricing. Amazon offers a typical tiered support model, with four tiers (Bronze, Silver, Gold, Platinum). At the high end (Platinum), you pay the greater of $15K per month or 10% of your monthly bill for phone support and 15 minute responsiveness; at the low end (Bronze) you pay a flat fee of $49 for access to community forums.

There are essentially two problems with this approach to cloud support:

](http://www.hightechinthehub.com/wp-content/uploads/2012/05/cloud_support_by_category.png)The classic software maintenance model was created before SaaS and MRR, and represented a way for software providers to drive recurring revenue. The typical model resulted in customers being charged 20% on average annually for a provider to support the software. The issue with applying this model to cloud support is that there is no custom installation of software for a customer, so the likelihood of the support being specific to the customers’ specific use is substantially lessened.

To prove the point, I did an analysis of one year of support issues across a series of AWS accounts for which I am responsible, and found that 80% of all issues were caused by failure or performance problems with the underlying APIs.  The breakdown was as follows:

The second issue with the pricing of cloud support it that it is priced proportional to your monthly costs. This actually made sense with software licensing, where the complexity of supporting an installation was directly proportional to its scope and thus cost. But as mentioned previously, the cloud provider is not actually supporting your specific use of their infrastructure, but rather the availability, performance and security of their infrastructure.

The time has come for a cloud provider to innovate in the pricing for support. We need support services that are priced per incident, with different tiers to allow customers to pay more for either accelerated or consultative services (e.g. architecture consulting). In the meantime, I recommend customers carefully review their support needs and the available options to ensure they are getting the best value for their money.