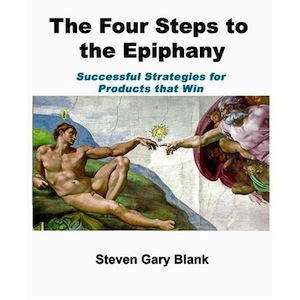 Last spring when I first starting seriously thinking about launching a company, I went on a reading binge. I read everything from how-tos to case studies to business fiction. While a lot of books in this genre are without value, there were a few I would recommend to anyone looking to start a company.

The Intelligent Entrepreneur by Bill Murphy

This HBS book follows the story of three entrepreneurs from the Harvard Business School class of 1998. Each starts a company, two in the waning days of the Dotcom Boom. It follows their challenges, near failures, and eventual success. At times I will confess it reads like a commercial for HBS (new drinking game: take a drink every time you encounter the phrase “elite business school”). But I also found the case study approach to be intellectually engaging. The author also provided great insight on several entrepreneurial topics.

In addition to being good reads, books by Brad Feld tend to also make good listens via audio. Hint: this is not one of them. I practically fell off a treadmill trying to follow an example of capped participating preferred. But if there is any chance you plan to raise venture capital, this book is a narrated autopsy of a modern term sheet, dissecting and providing balanced advice on all the major components of a venture deal.

The Lean Startup by Eric Ries

The Lean Startup movement that had been simmering in places like Boston and the Silicon Valley since the mid-2000s, went global with the release of Eric Ries’s book. If you want a basic introduction to the concepts of the Lean Startup movement, there is no better place to start. It’s definitely an imperfect book, that dabbles into management philosophy - but is definitely worth the investment of time. It's also a great book for technical founders to engage other non-technical colleagues in Lean thinking.

The Four Steps to the Epiphany by Steven Gary Blank

This is the book that started the Lean Startup movement. Someone once told me this is Steven Blank’s Standford class notes turned into a book form.It has great content density, with several sections that need to be read and reread for full understanding. It also introduces some great new concepts and terms, such as the definition of the earlyvangelist. What it lacks in the universal readability of Eric Ries’s book, it more than makes up for with its content.

Yes, another Brad Feld Book. While at first glance you may think this is a long advertisement for the Tech Stars program (and you’d be right). But Brad & David distill their aggregate experiences from their personal backgrounds and Tech Stars to provide some great advice to early entrepreneurs. The book is probably more slanted toward the first time entrepreneur, but provides a great read for anyone interested in the topic of startups. If you read Brad’s blog, you will find this book has a similar style and voice.

While this book was written in the 1990s, it has aged surprisingly well. I am almost reluctant to put it on my list, since by 2013, I expect every person in high tech has already read it. The books explains why companies that lead markets (e.g. Kodak with cameras, Xerox with digital copying, Palm/RIM with smartphones) often fail when confronted with disruptive innovation. The case studies are not so interesting - e.g. disk drives, mini steel mills, hydraulic excavators - but the data, narrative and hypotheses are very compelling. This is a high tech must-read.

The Art of the Start by Guy Kawasaki

Books by Guy Kawasaki almost always make a fast and enjoyable read. This book is something of a tech classic. While the content density is generally low (e.g. rules for determining font size in a PowerPoint presentation), it reads almost like a one way stream of consciousness conversation with Guy. The book is worth the read though for the humor and occasional pearls of wisdom.

The VC Game by Jeff Bussgang

Jeff is a general partner at the local Flybridge Capital Partners. He provides insight and advice on the process of raising capital, leveraging his experiences both as an entrepreneur and venture investor. I read this back when it first came out in 2010. It is a good read, that goes much deeper on some of the venture topics on his blog.

If you are going to start a technology company in the Boston area, you may as well know a little about its history. This book has been out of print for years, but you can pick up used copies from Amazon relatively easily. This book starts from the Morill Land-Grant Act in the 1800s to the beginning of the personal computer boom. Okay, okay, it’s missing the last 20 years of Boston tech history - but still a good read. ;)

Related Posts: What’s In My Bookbag, My Entrepreneur Bookbag