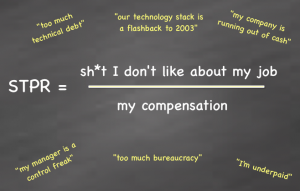 I once worked for a Fortune 100 executive who introduced me to a useful metric to judge the quality of a job: the Sh*t To Pay Ratio (or STPR for short). By his own definition, STPR was the level of compensation required to justify staying in or taking a particular job. If the job was particularly interesting, the compensation needs were low; if the job included onerous duties and/or working with difficult personalities, the compensation needs suddenly increased. I should note that this was the same executive who once described a new opportunity he wanted me to take as his “Chernobyl” - so clearly this was a man who could turn a phrase (let’s just say my STPR for that opportunity never quite worked in my favor ;) ).

I should note that the P in STPR can represent any form of compensation, not just salary. So if your passion is saving the rainforests, working for the Rainforest Foundation counts in the denominator of your STPR.

In addition to its humor value, STPR is a useful metric in evaluating whether you are in the right opportunity. To assess your STPR, just make a list of all the reasons you like and don’t like your current job. If there are more things you don’t like, you have a high STPR and should consider making some changes. If you have more things you like in your current role, you have a low STPR and are likely in the right place.

Life is too short and our industry too intellectually engaging for a high STPR.