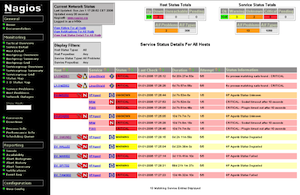 For most of the last two decades, enterprises have turned to IT Operations Management (ITOM) suites like IBM Tivoli and HP OpenView to manage their large and rapidly growing data centers. These suites have provided an integrated family of products to deliver fault, configuration, asset, performance and security management for IT infrastructure. The five providers who have dominated this market - IBM, HP, CA, BMC and Microsoft - have grown ITOM into a multi-billion dollar market, with strong compound annual growth rates. But something happened in 2012. While the overall category grew to a healthy $18B, for the first time, the revenue growth for the top vendors dramatically shrank (IBM 0.8%, BMC 0.9%, CA -0.6%, HP -4.3%). To understand what went wrong, it’s necessary to reflect back on the history of ITOM.

The Birth of ITOM

In the early 1990s, IT Operations Management was a nascent market, with little to no interest from the big technology vendors. Its emergence evolved from two successive market trends: the shift from mainframes to client-server in the late 1980s / early 1990s, and the growth of the internet in the early / mid-1990s. These two disruptive transformations resulted in a rapid growth of enterprise data centers in the 1990s, generating a driving need for software to assist in the operations and management of large scale infrastructure.

A number of startups were founded in the early 1990s to solve the enterprise data center management challenge, with names such as Tivoli Software, Concord Communications, Patrol Software, Micromuse, BGS, and many more. These startups often had a specific focus in the ITOM world - e.g. such as Micromuse for event management, Concord for reporting, and Tivoli for fault management. Several of the companies achieved solid revenue traction, attracting the notice of larger companies. Starting in the mid-1990s, led by Lou Gerstner’s acquisition of Tivoli, this market was consolidated by the five technology companies. The dominant product lines that evolved are the ones we all know today: IBM Tivoli, HP OpenView, CA Unicenter, Microsoft System Center and BMC.

The consolidation of vendors brought a rapid expansion of the market, which continued unabated through the mid-2000s, with their product suites continuing to accrue new product and components through a steady diet of acquisitions. But starting in 2005, several transformations began to erode the dominance of the ITOM suite, including:

Open source projects like Nagios arrived offering some of the critical functionality of ITOM for pennies on the dollar. While these products did not compete directly with the breadth or depth of the enterprise suites, they achieved widespread adoption in the SMB.

New point tools arrived on the scene with a fresh perspectives on traditional systems management. These tools focused on specific problems, such as Splunk with log management, delivering compelling solutions that appealed immediately to the SMB. Splunk’s $1.6B IPO in 2012 was in many ways a wake up call to the ITOM vendors, who had previously spent over a decade with no new competitors.

With the exception of Microsoft, the rest of the vendors relied heavily on acquisition to bring innovation to their aging suites. Unfortunately with acquisitions, the suites began to bloat, the product families became less integrated, and the aggregate innovation began to slow. IBM Tivoli, as an example, still sports a rather simplistic X-based console and uses CORBA for communication (unlike your high school jeans, CORBA isn’t getting cooler 25+ years later).

Nothing challenges an existing market like a disruptive innovation. The cloud introduced several new variables into the systems management equation, including on-demand infrastructure, consumption-based pricing, platform services, infrastructure as code, and elastic infrastructure. These changes transformed how organizations manage infrastructure, further exposing the increasing obsolescence of the existing ITOM suites.

Requiem for the ITOM Suite

The dramatic change in revenue from the top vendors (exempting Microsoft) is a further signal that a seismic shift is occurring in the ITOM market. What started in the SMB has gradually moved up market to the enterprise. No longer are IT organizations looking to integrated suites to solve their infrastructure management challenges. Instead they are building best of breed suites from a combination of point products and open source. Some of the new names on the ITOM landscape include Chef, Puppet, Nagios, Zenoss, Splunk, Loggly, Pingdom, Airbake, Graphite, StatsD, and many more.

From the demise of the ITOM suite is rising a new way to manage infrastructure. After a decade in the dark ages, a renaissance is occurring in ITOM.

For further reading, check out The $18 Billion Disruption.