Day 3 of re:Invent kicked off with Werner Vogels, CTO of Amazon, as master of ceremonies. Over the next 90 minutes he handed the mic over to Neil Hunt of Netflix, Adrian Cockcroft of Netflix, Ilya Sukhar of Parse, Greg Duffy of Dropcam, and Mike Curtis of Airbnb. Werner said there is drinking game where you are supposed to take a shot every time someone from Amazon mentions Netflix. If you played this game at this keynote, it must have been a very long day for you.

The biggest news was Amazon Kinesis, a real time service for storing and processing big data streams. I read Jeff Barr’s blog and scanned the documentation, and it may be the most innovative new service from Amazon since S3. He also announced RDS support for Postgres, which while it received some good cheers from the audience, may have been the single worst kept secret of the conference.

But I think the introduction of the C3 and I2 instance type families may have been the most significant announcement long term, since they enable Amazon to support highly specialized workloads previously not possible in the public cloud. The C3 family spans from 2 to 32 virtual cores, are SSD-backed, and target heavy compute workloads like analytics and 3D rendering. The I2 product family is optimized for high performance I/O workloads like MongoDB and Cassandra, are also SSD-backed, and can achieve at the top end 320K write I/O operations per second (which is… INSANE!). The I2 family would be available “later this month”, making me think: I wouldn’t want to be that team lead. 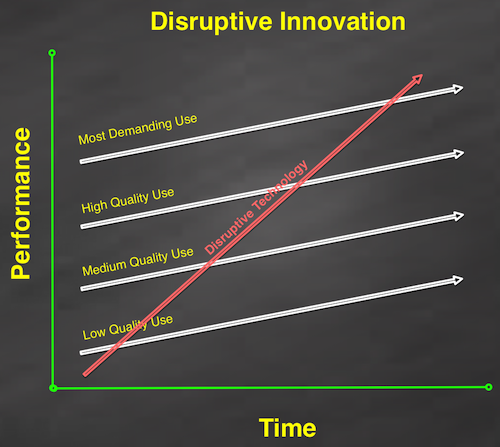 What makes these announcements so significant is that AWS is now capable of handling some of the most demanding workloads in computing. If you put this in the context of the disruptive innovation curve (chart t0 right), these two product families combined with EBS PIOPS, may have enabled Amazon to cross an important milestone in the evolution of the cloud: support for the most demanding use. I remember being in Paris a few years back at an IBM SmartCloud conference, where the CTO of a large enterprise made the comment: “The public cloud will never be able to run my SAP workload.” Amazon to the enterprise: challenge accepted.

I also enjoyed Werner’s digression on how Amazon ensures its continuous delivery process provides features that matter. He discussed the four required steps executed before starting development of a new AWS service or feature: 1) write press release, 2) write a FAQ, 3) define user interactions, and 4) write framework of user manual. Whatever they are doing is clearly working for them, since their pace of innovation is unparalleled among large technology companies today.

But my biggest takeaway from today is that re:Invent 2013 marks the time at which Amazon shifted its focus from building infrastructure to building higher level platform services. With the exception of S3 and Redshift, most of the previous 7 years of AWS have been heavily dominated by the construction of scaffolding. But in the last year, this scaffolding has suddenly enabled a steady rollout of new and highly innovative services like Redshift, Kinesis, AppStream, and WorkSpaces.

The rest of the day I took in a couple sessions, networked with some interesting people, and had a full day of meetings in our suite. By the end of the day I was exhausted, had some drinks in the courtyard of the Grand Canal Shoppes with some colleagues, and then headed to the airport for a red eye home.

It was a productive and exhausting day, but I'm glad to be home.