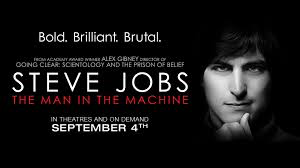 Two weekends ago my 10th grade son and I made our way to the Kendall Square Cinema to see the recently released Steve Jobs: The Man In the Machine. I didn't tell my son the documentary was available through Amazon Video for fear of not being able to convince him to take a trip into Kendall (high school kids are very fickle). If you are not familiar with the documentary, it was produced by Alex Gibney, the creator of well know films on Scientology, Enron and WikiLeaks.

The film starts with a simple question: why was there such an outpouring of global grief for the death of Steve Jobs. As the film points out, the grief we saw was not what you might expect in the death of a business leader of a for-profit company. The film then takes you on a long and somewhat meandering journey through the life of Steve Jobs: from birth to his passing. At times it channels Walter Isaacson, casting Jobs as a narcissistic visionary whose great flaws overshadowed his great achievements. Other times the story starts to sound like one of Gibney's previous films: a hard hitting expose on Apple. And then at other times it seems like a sincere attempt to uncover vignettes from Steve's life that explain who he was (e.g. sushi in a Japanese hotel with his estranged daughter, contemplative time in a Japanese garden).

I found a few interesting scenes in the film - e.g. the story of Steve bringing the Lisa motherboard to a Buddhist monk to prove he was enlightened, his former girlfriend claiming he had a "golden chain" (being enlightened while still being attached to his ego), the interview of the former member of the Mac team whose life was shattered by the experience of working with Jobs. But overall, the film didn't really uncover any new ground in the story of Steve, nor did it answer its fundamental opening question.

To the answer to the question "Why was there such an outpouring of grief at the death of Steve Jobs?" Gibney gives us the muted conclusion: well... I'm not really sure.

Go and and see The Man In the Machine, but set your expectations low.