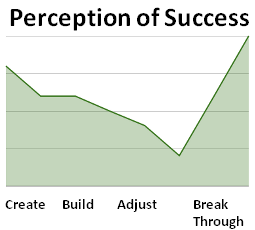 We all know startups go through ups and downs over their lifetimes, each producing a different perception of success from inside the company. There are the heady days of formation where the vision is fresh and anything is possible, the long march to a first product ship, and then the long hard slog to becoming a profitable and growing company. In thinking through my personal experiences, the perception of success equates roughly to the different phases of a startup: create, build, adjust and break through.

For today’s post, we’ll review the perception of success in a startup. In honor of the location in which this post was written, I will be using Starbucks as my reference. ;)

The create phase usually starts with one or more founders and an idea, and ends with a small skeleton company. This is a highly creative phase where the perceived potential of the idea is limitless. Much of the initial culture and DNA of the company will be formed as decisions get made (or do not get made) and a business plan and product takes shape. The perception of success within the company is usually very high, driven by the perceived potential of the vision. While there are always big up or down swings - such as when you receive positive or negative validation of the vision, or as the team navigates funding - this will typically be the high point in the life of an early company.

Starbucks reference: In 1981, Howard Shultz joined Seattle coffee retailer Starbucks, visited Italy, and became enamored of Italian coffee culture. He worked to convince the owners of his vision to transplant Italian coffee culture to the U.S., which resulted in a 1984 pilot of an espresso bar inside a retail store.

Now that the company has proven the potential of its vision, it needs to build and then sell its full fledged product. In high tech startups, this phase is often associated with a round of venture capital to fuel the growth. At first the growth will be focused on engineering, but this will be quickly followed by sales, marketing and support. Eventually there will be a fully formed company executing to the founding vision (or more likely something close to it). Perception of success will often degrade over time as the limitless vision gives way to the necessary compromises of running a business. Building, marketing, selling and supporting new products is hard, and few new startups find rapid traction in their new market. At this phase, the prospects are harder to find, the deals are harder to close, and the first product issues begin to surface.

Starbucks reference: Frustrated by the unwillingness of the owners of Starbucks to invest in his vision, Howard Shultz left Starbucks in 1985 to found Ill Giornale. During this time, he received 217 rejections from investors in raising the initial capital for his business. His persistence and hard work culminated though in the launch of a 700 square foot store in Seattle.

This is the make or break phase of startups. The business is operating but is not executing to plan. The internal perception may be that there is a sales, marketing or engineering challenge impeding success. But more often than not, it is a combination of several factors. This phase can often be associated with staff changes, as the company cycles through personnel in hope of finding the magic formula to break through.

Perception of success at this phase usually degrades, as the promise of the vision gives way to a long hard slog to drive revenue. This is the phase where the strength of a CEO and his/her management team are tested the most, and when the founding vision likely changes based on the deeper understanding of the customers and market.

The most common explanation for startup failure, execution, matters most in the adjust phase. Unfortunately, there are few short cuts to success. Breaking through requires a maniacal focus on driving customer value, hard work, and and willingness to adapt to the needs of your customers and market.

Starbucks reference: Howard Shultz iterated all aspects of his coffee shop in 1986, from uniforms to music to coffee roast. It is in this iteration that he learned how to market, sell and deliver a successful product to his customers (if not for this iteration, you might be listening to Italian opera music in a local Starbucks devoid of places to sit).

A few select startups will achieve the break through phase, where their successful execution begins to pay off. The product is driving real customer value, the marketing team has figured out how to drive leads, and the sales team knows how win their share of competitive deals. Revenues are on the rise, the company adds staff, and the management team begins to focus on maintaining and/or accelerating the growth. The perception of success in a break through phase will be increasingly high, with its height proportional to the size of the market success.

Starbucks reference: This is the phase at which Howard Shultz, having proven locally the success of his vision, acquired Starbucks, raised capital, and started to rapidly expand from a few stores outside Seattle to 165 nationwide by the 1991 IPO. This accelerated growth was made possible by the hard work of the previous phases, that served to create the “cookie cutter” for success.

Your perception of success in a startup will go up and down over the years, guided by the four phases. Unlike other professional experiences, the highs will likely be higher, and the lows will likely be lower, but the journey is almost always worthy of the destination. So strap on your seat belts and enjoy the ride.