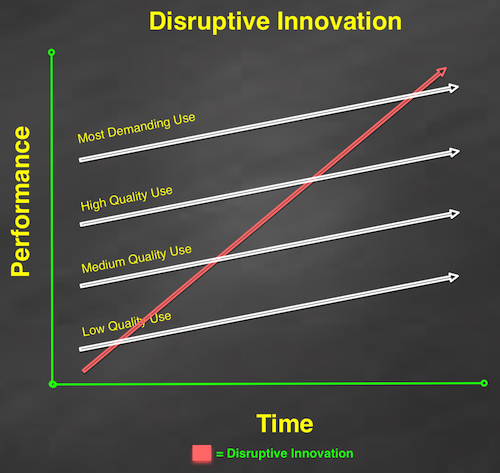 My interest in cloud computing was driven several years ago by a simple belief: the cloud is a disruptive technology that will transform the landscape of computing. The belief was deeply influenced by Harvard professor Clayton Christensen’s 1997 book, The Innovator’s Dilemma, which postulates that established market leaders almost always fail when confronted with disruptive innovation. While few today would argue cloud computing is not a disruptive technology, there is little agreement on the timing and impact of the disruption.

The simple fact is that existing market leaders are incentivized to invest in sustaining their markets. In the language of The Innovator’s Dilemma, they develop value networks of customers, suppliers and shareholders that influence a company toward the sustaining changes necessary to maintain and grow their current markets. When these value networks are confronted with disruptive innovation, they cannot effectively respond since it requires competing with and/or diverting resources from their established products, markets and customers.

Disruptive technologies are almost always easy for market leaders to ignore, since they start as inferior to existing mainstream solutions. Do you remember the high price and poor quality of the early digital cameras? The complexity of the first digital music players? The price and storage limits of the first solid state drives? The feature limitations of the first smartphones? It was only as they matured and began to enter the mainstream markets did established market leaders begin to view them as competitive. Those of us local to the Boston area need only to look at at the dead carcasses of our past - e.g. Digital Equipment, Wang, Data General, Polaroid, Apollo, Prime - to recognize the impact of disruptive innovation.

Disruption in the Cloud

When cloud computing first arrived in the mid-2000s, its price and performance were inferior for most computing use cases. But like all disruptive technologies, it offered features that appealed to a market segment with few or no alternatives: on-demand infrastructure and consumption-based pricing. These changes in characteristic appealed most notably to high tech startups, where the value of time to market and monthly billing trumped long term price and performance. Web hosting providers were one of the first to recognize cloud computing as a competitor, as Amazon Web Services started to adversely impact their market share. Not long after the cloud entered this first mainstream market, most industry analysts realized its disruptive potential and the cloud hype cycle had begun.

Since computing is a collection of different industries, the response to cloud disruption has varied. Some have embraced cloud computing, choosing to either migrate to the cloud or offer their own cloud services. Others have defended their current markets with a marketing-driven rebranding of their existing solutions, or by trying to offer low-end cloud services as a upsell to their more feature rich traditional services. And still others have hedged their bets, trying to embrace the cloud while hoping to delay the disruption in their existing markets.

This week the CIO of a public company said to me: “The cloud will never provide the performance necessary for running my SAP infrastructure.” While I couldn't argue with him in 2012, I also couldn’t help but wonder if he and his predecessors may have said the same thing about the web, client-server, or even the personal computer. So while I nodded in agreement, I kept his business card so I can check back in with him in a few years.

Disruptive innovation is like a watching a slow moving tank heading your way: adapt or watch the treads roll over you.