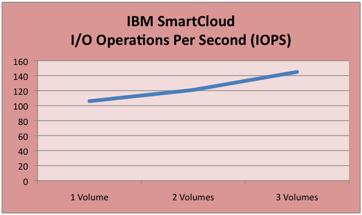 I had previously co-authored the post Importance of Striping in the Cloud with Josh Pasqualetto, which promoted the flexibility of creating RAID 0 stripes from multiple Amazon EBS volumes. This last weekend IBM added support for attaching multiple volumes on the SmartCloud, and Josh just couldn't resist gathering more data.

The numbers show the IBM SmartCloud persistent store outperforms the Amazon Elastic Block Store at 1, 2 and 3 volume disks. In fact a disk made from 3 striped IBM volumes actually performs about 45% better than the equivalent 4 volume disk on Amazon.

IBM has currently chosen to to limit the number of volumes you can attach to three, so we cannot provide data for what we think is the optimum performance-reliability of 6-8 volumes - but we hope we can dissuade them of this limit in the future. ;)

Reminder: Combining multiple volumes has the affect of aggregating the MTBFs of each volume - so more stripes results in lower reliability. The optimum performance-reliability on AWS in about 6-8 volumes. We'll need more time & data to derive the equivalent "sweet spot" for the SmartCloud.