I'm still laughing at everyone who predicted that telcos will rule the cloud, so thought I'd try my hand at my own predictions. But unlike everyone else, I'm going to update this post in November 2014 to ensure it seems prescient. ;) 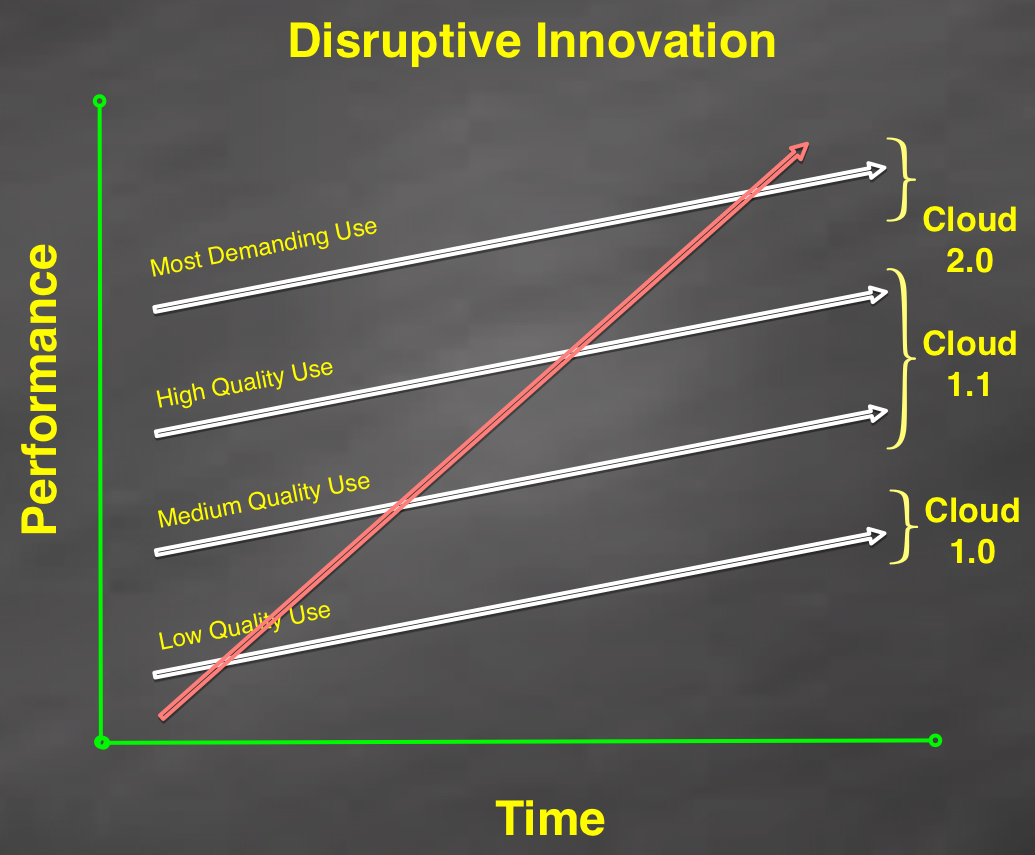 The early cloud was a jumble of established tech giants and startups, with Amazon pushing IaaS, Microsoft / Salesforce pushing PaaS, and a host of startups offering a mixed bag of services in between. In the end though, Cloud 1.0 was defined by the marketshare winner, Amazon, and was defined as: on-demand compute, storage and network services, charged based on consumption, and controllable through APIs (infrastructure as code).

2014 will bring the emergence of Cloud 2.0: a re-envisioning of PaaS that delivers standalone high value / high margin point services, built on top of IaaS. Whereas the original PaaS was envisioned as an end to end development and deployment platform for applications (e.g. Force.com, Azure), the new PaaS is a collection of vertical services that enable the solution to specific problems (e.g. data warehousing, data analytics, video streaming).

While Cloud 1.0 was innovative and disruptive, from the perspective of Clayton Christensen’s disruptive innovation curve (see graphic), it provided support for primarily low and medium quality uses of infrastructure. Cloud 2.0 will enable the delivery of higher quality uses of infrastructure, enabling cloud computing to solve problems previously very challenging with virtualization and/or IaaS.

Whereas the standardization of Cloud 1.0 (e.g. instances, block storage, object store, databases) has made portability mostly manageable by early customers, the adoption of Cloud 2.0 services (e.g. data warehousing, data analytics, video streaming) will result in a substantial divergence between cloud stacks. With Cloud 2.0 will come an increasing concern around cloud portability, as organizations find the adoption of higher level services increasingly resulting in vendor lock in. This will in many ways mirror the operating system wars of the early/mid-1990s, with customers and ecosystem providers finding a commitment to a technology stack (e.g. OpenStack, AWS) increasingly important.

#3: The Google vs. Amazon Show

While it will be several years before we can declare a winner in the battle for the cloud, to date it has been all Amazon. Even the most enthusiast cloud evangelist will admit the next best vendors is at least two years behind Amazon. This will change in 2014 as Google will emerge as a real challenger to Amazon, competing on both price, breadth of services, and reliability.

While being a successful cloud provider requires the close orchestration of hardware, software and services, in the end success will be driven by the software. Both Amazon and Google have proven their ability to be top innovators in software (e.g. BigTable, S3), and we will see them emerge to battle head to head over high profile customers.

#4: The Long Goodbye to Private Cloud

The private cloud has one major flaw in its armor: it is developed, deployed and managed by the same IT organizations that provided enterprises their current underutilized, underperforming, and non-agile data centers. While private cloud technologies have substantially transformed IT’s ability to manage more efficient data centers, their success will increasingly be measured by what the opportunity cost of the business to work with Amazon or Google. While private clouds will be available beyond the next decade, the discussion in 2014 will shift from public vs. private to public vs. hybrid.

We have seen a near complete disruption of traditional ITSM suites (e.g. IBM Tivoli, HP OpenView, CA Unicenter). In their place are modern, cloud friendly, best of breed point solutions (e.g. Chef, Puppet, Splunk, New Relic, Nagios, Sensu) assembled by customers based on their specific needs. The vertical focus of the point solutions has resulted in “key hole” views of the infrastructure, making it increasingly hard to manage the business supported by the applications / infrastructure. This will result in an increasing focus on data integration between the ITSM point solutions, and the evolution of a new product category.