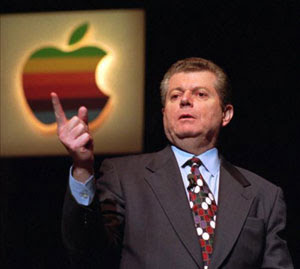 I've been reading Brent Schlender's Becoming Steve Jobs this weekend, which is being promoted as the "real story" of the Apple CEO. There is no doubt Walter Isaacson didn't make too many Apple friends with his Steve Jobs biography, which portrayed Jobs as a sort of brilliant but high functioning sociopath. I'll post a review when I'm done but felt the need to pass on this anecdote.

The spring after the 1996 acquisition of NeXT, Larry Ellison saw the then Apple CEO, Gil Amelio, at a party and introduced him to Gina Smith, a technology journalist. By this time Steve Jobs had concluded Amelio was a "bozo". With all the news of turmoil from Cupertino, Smith naturally asked how Apple was doing. Amelio said very seriously:

Apple is a boat. There is a hole in the boat and it is taking on water. But there also a treasure on board and the problem is: everyone is rowing in different directions, so the boat is standing still. My job is to get everyone rowing in the same direction."

After Amelio left Ellison turned to the person next to him and asked: "But what about the hole?"