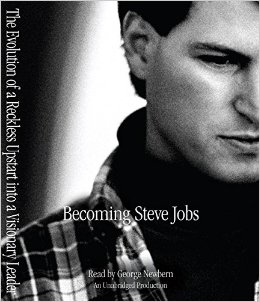 Two things made me want to read Brent Schlender’s Becoming Steve Jobs after its release last week: 1) all the media talk from Apple insiders that this was the “real Steve Jobs”, and 2) its simple and compelling premise: exploring how a reckless and arrogant entrepreneur became one of the greatest business leaders of our time. While it was a good read, I couldn’t help but be slightly disappointed that it was more about the former (showing a new side of Steve Jobs) and less about the later (how Steve evolved).

Let me dispense with what I didn’t like. If you read Walter Isaacson’s authorized biography, Steve Jobs, you may have concluded Steve was a brilliant but high functioning sociopath who achieved his goals at all costs to those around him. While I didn’t expect Becoming Steve Jobs to retread old ground, I was surprised it made almost no attempt to acknowledge this side of his personality until the last chapter. Instead Schlender provides stories of Steve helping a stranger whose car broke down outside his house, crying with Ed Catmull and John Lasseter before announcing the Pixar acquisition, almost being late to the famous Stanford commencement address, and of turning down Tim Cook’s offer in his last months for a live liver transplant. Don’t get me wrong: these were all great stories that really showed a human side lost in the Isaacson book - but the near absence of the “bad Steve” made you almost doubt at times the motivations of the author.

Now for what I liked. I really enjoyed the stories of Steve’s journey from being fired from Apple to the acquisition of NeXT. The story behind the Fortune interview with Bill Gates and Steve Jobs was particularly compelling, with its stark contrast between the two industry luminaries meeting at Steve’s Palo Alto house during the era of Microsoft’s hegemony. And let’s be honest, who doesn’t like reading about the tactical decisions that went into taking Apple from near bankruptcy to world domination?

So what are my take aways from this book?

1: The Importance of Fearing Failure

At some point in the decade between Apple tours, Steve went from a Silicon Valley icon to a has-been. The narrative reveals his increasing desperation as success eluded him and the Dotcom boom passed him by. While he set out at NeXT to get revenge on Apple, at some point in this journey he had risked so much that failure was no longer an option. In Steve’s own words: “I’m convinced that about half of what separates the successful entrepreneurs from the non-successful ones is pure perseverance.” Sometimes when failure is no longer an option, there is nothing left to do but succeed.

One of the more surprising revelations not covered in Isaacson’s biography was Steve’s admission years later that had he focused on the Apple III (the incremental product) instead of the Lisa and Mac (the disruptive products), he might have prevented the future dominance of the IBM PC. Steve learned over the years to temper his natural tendency to make all or nothing gambles on disruptive technologies, and instead invested in the incremental. Schlender shows that while with hindsight his second tour at Apple was revolutionary, each step was driven by measured and incremental investments. Sometimes the rapid execution of the evolutionary in a tight feedback loop can be revolutionary.

3: The Importance of an Agile Organization

Steve founded NeXT to deliver a workstation computer to higher education; when NeXT was acquired in 1996, it made a Unix operating system and web development software. When Steve invested in Pixar, it was to make a computer that could support animation studios; when Pixar was acquired by Disney in 2006, it was a producer of animated movies. Steve’s journey proves that it’s possible to make mistakes in building a business provided you have surrounded yourself with an organization capable of adapting to change.

Steve was known at Apple for having an uncanny sense of the market. He recognized Apple could grab a share in the emerging digital music industry through an online store integrated with the Mac; he intuited Apple could win with a better mousetrap (iPod) even though they were very late to the digital music market; he knew the iPhone had a much greater chance of success even though the iPad was much further along in development. All the intuition that seemed to work for him at Apple though, had eluded him for years at NeXT and Pixar. The difference: Steve knew how to build great products for consumers - but he didn’t know how to build workstations for educational institutions and/or an animation business.

The real value of Becoming Steve Jobs is not in its portrayal of a more “real Steve" - but in its reminding us that he was also an entrepreneur who struggled, took risks, failed, persevered, and continually evolved. We can admire and respect the accomplishments of Steve Jobs the great business leader - but we can really learn from Steve Jobs the entrepreneur.