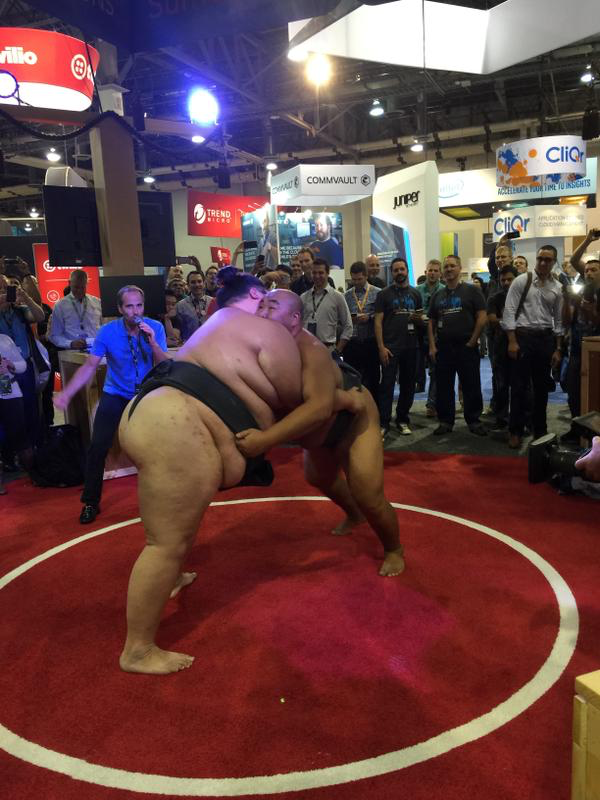 It’s good to be back in Boston after spending the last few days at re:Invent 2015. While the event was a great success for Amazon and its partners / customers, the increase in attendees from 12K last year to over 19K this year made this re:Invent much more crowded and frenetic. But at the same time there were many improvements: the exhibit hall was bigger, the keynotes better structured, and there was a greater diversity of industries / roles among the attendees (with a lot more enterprise executives).

I arrived in Vegas late Tuesday on a delayed flight. My lateness resulted in an upgraded room that came complete with two bathrooms, a hot tub, a living room, dining room and a… wait for it… an exercise room. Only in Vegas.

The first day of re:Invent was partner day for Amazon, and their 11 AM kick off was followed by several sessions focused on ISVs, resellers, VARs, consultants and MSPs. I had several planned meetings throughout the day with customers, prospects, partners and the press. Amazon announced that CloudHealth is one of three products they are recommending to their partners to support partner billing, which was a nice win for my company. I also attended a session on migration led by one of our Boston-based AWS solution architect leaders, Tom Laszewski.

At 5 PM the exhibit hall opened for all attendees, and a mass of people flowed in. This year the hall was much bigger, with Amazon in the center toward the front with a double-decker booth. The second deck of the AWS booth actually had a bar that served Amazon orange drinks (orange julius during the day, orange martinis in the evening), and proved to be a great meeting place for me throughout the week. The lower deck had the AWS equivalent of a Genius Bar, staffed by employees who could help customers / prospects with a wide variety of questions and issues.

![](/content/images/2015/10/booths-2.png)
The [CloudHealth booth](http://www.networkworld.com/article/2988885/cloud-computing/hottest-products-at-aws-reinvent-2015.html#slide7) was located in a corner next to AWS. It proved to be a great location, and we had strong traffic all week. Our Cloud Genius contest and swag were very successful with attendees. But I must be honest that while there were a lot of great booths - e.g. Alert Logic, Chef, Pager Duty, Datadog - none could quite complete with Sumo Logic. The Sumo team brought professional sumo wrestlers to their booth, who actually… I cannot say this without a smile... wrestled in their booth. Crowds in the hundreds would gather each time a match occurred. Paraphrasing the words of the Red Sox great, Pedro Martinez: as a vendor, all you could do was tip your hat and call Sumo Logic your daddy. ;)

I was invited to the re:Invent executive track this year, which provided access to a special set of sessions given by the Amazon executive team (e.g. Andy Jassy, Werner Vogels, Stephen Schmidt, etc…). It also came with access to a lounge where you can network with other people on the track. Since there were a surprising number of my customers in the lounge, it proved to be a great way to catch up informally with customers, prospects and colleagues.

Wednesday I grabbed breakfast in the Executive Lounge and then learned Executive Summit attendees had up front reserved seating for the keynote. We actually were able to walk through the backstage to get to our seating. When I got to my seat, I texted my CEO that I was in the 10th row center at the keynote. He texted back that he was seated in a comfortable chair in the executive lounge in front of a giant screen eating an omelette. We both agreed he won.

Andy Jassy drove the keynote, using a theme of the seven freedoms of the cloud: freedom to build, freedom to get real value from data, freedom to get data in and out of cloud, freedom from bad database providers, freedom to migrate, freedom to have agility & security, and freedom to say yes. The freedoms provided an organizing structure that made the keynote much stronger than in previous years. He made various announcements related to the particular freedom, including Amazon QuickSight, Kinesis Firehose, Snowball, Inspector, MariaDB, WAF, Dedicated Hosts, and Database Migration Service. He also had executives from Capital One, Accenture and Intel come on stage to present their cloud stories.

One of the highlights of Andy’s keynote was the incredible traction he reported. AWS had 81% year over year growth, making them the fastest growing technology company in the industry (yes faster than Google). He also reported a $7.3B trailing revenue run rate, beating even my most optimistic expectation. If there is anyone left on earth who still doubts Amazon will be a dominant player in infrastructure for a long time to come, these growth rates should help you see reality.

The general themes conveyed in the keynote were: the cloud is everywhere, everyone is using it, and AWS is making it as easy as possible to get you into it. Whereas two years ago AWS was targeting the early adopting / fast growing tech companies, and last year they targeted the innovative / early adopting enterprise, this year’s keynote and service announcements seemed focused on the companies that were either early in their migration to the cloud or still considering it.

Andy took some humorous swipes at various competitors (e.g. Oracle, Cognos). I’m not sure what Oracle did to inspire the special loathing of AWS, but they actually had their own freedom: the “freedom from bad database providers”. It seems clear that if you are a provider of infrastructure that over charges, under-delivers innovation, and does not listen to the needs of your customers, you are increasingly likely to come into the AWS crosshairs.

The rest of the day for me was a jumble of meetings with AWS, customers, prospects, partners and colleagues. I ended the evening with a cocktail hour sponsored by Madrona and a ScaleVP sponsored dinner with fellow entrepreneurs.

Thursday was the biggest day of re:Invent: the Werner keynote. For those of you who have not seen Werner, he is the closest we cloud geeks get to a rock star. With his jacket, black jeans, concert t-shirts, colored sneakers and Dutch accent, he is as cool as we geeks get (and trust me, that is not very cool). ;)

I made my way from the executive lounge backstage to the morning keynote. I managed to get a fourth row seat, and waited while the DJ spun tunes to keep the audience engaged. Werner then arrived in all his sweaty glory, and proceeded to unleash the next set of announcements. These were all structured around a theme of six laws: Lucas Critique, Gall’s Law, Law of Demeter, Occam’s Razor, Reed’s Law, and the Gestalt Principles. As with Andy’s keynote the previous day, the structure made for a very engaging speech. Some of the announcements included Kinesis Analytics, an x1 instance type with 2TB of memory, t2.nano instance type, the EC2 Container Registry, several new cool Lambda features, AWS Mobile Hub, and AWS IoT. Werner also invited executives from BMW and John Deere to the stage to talk about their use of the cloud. The general message to take away from Werner’s keynote was: the cloud is everywhere now and AWS is here to help you with it (note: you'll see me in the audience at 0:17s in the previous video).

![](/content/images/2015/10/booth-winner.png)
I had several planned and unplanned meetings Thursday with AWS, prospects and customers. The highlight for me was a session by Llew Mason, the VP of the Amazon.com website, called *Developing a Culture of Innovation*. He explained how Amazon organizes for innovation: from two pizza box teams to team tenets to project status meetings. I’ll tweet a link to it if Amazon publishes a video for this session. I ended my evening with my 3rd annual re:Invent dinner with my very first customer. While most of the rest of our team headed off to the crazy awesomeness of the closing party, I headed back to the airport for a red eye home.

This year’s re:Invent was yet another success for Amazon, its customers and partners. It’s clear that the pace of innovation is not slowing down in the cloud, and that the seismic industry disruption many of us have been expecting is now fully underway. As a partner who has been attending with my company for our third successive year, this event was a reminder that while we can appreciate how far we have come, we need to buckle down and remember how much more we have yet to do for our customers.