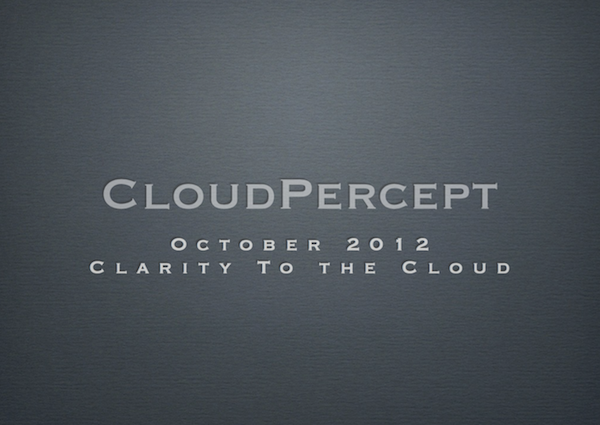 While in truth there is no singular moment in which you start a company, I still mark the official start of CloudHealth to a Lean experiment that took place three years ago. It’s a story that reveals the power of experimentation, the value of taking managed risks, and the importance of a little luck. Here is that story:

I left my role as VP of engineering of the cloud document archiving startup Sonian in the mid-summer of 2012. I’d known I was leaving since the early spring when Dan Phillips and I started hacking on an idea to enable the better management of startup business metrics. After a few weeks on the idea though, I confessed to Dan I had no passion for it, and wanted instead to start a business in cloud management. I spent the next few months preparing my exit: an Entrepreneur In Residence role at a venture firm, a part time consulting gig, binge reading on entrepreneurship, and readying myself for what I expected would be a year or more without salary.

I decided to take a different approach to starting CloudHealth: committing myself to a market instead of a product. Don’t get me wrong: I had more than a few product ideas rummaging around in my head at the time. But rather than allowing myself to be seduced by the latest cool idea, I wanted to follow data. The market I chose was at the intersection between two of my professional passions: cloud computing and infrastructure management. Over the next few months, I ran Lean experiments to prove / disprove various market assumptions. My experiments usually ran one to two weeks, and included everything from online polls, customer interviews, ad campaigns, fake web sites, and concierge services. I also spent late nights building software to support my experiments, which would eventually become my Minimum Viable Product (MVP).

The event from which I date the start of the company was a new Lean experiment that took place in the fall of 2012 called The Sale (yes, I used to give my experiments names). The Sale was designed around cold calling a handful of companies in an attempt to sell my MVP. Since my MVP was crude and not ready for prime time, the experiment was designed for failure. The idea was to cold call prospective customers with no relationship to me, and try to convince them to purchase my MVP product for $48K per year / $4K per month. In the process of being rejected, I hoped to acquire validated learning around the additional features these companies needed to justify purchasing a product at that price point.

My first cold call was with the CFO of a fast growing technology company. While the CFO understood the problem I was addressing, he had almost no input on features, and had no interest in paying for a solution - even suggesting at one point I give his company the software for free. But just when I thought the call could not get any worse, he surprised me by asking for another call the next day with his VP of engineering.

The next day I spent an hour on a remote meeting with the VP of engineering and members of his team. The call involved a short slide deck, a demo and a what turned out to be a very engaging discussion. The assembled team not only had deep knowledge in the area in which I had built my MVP, but had already built many of my features themselves. By the end of the call, as I started to wrap up, the VP of engineering made the surprising statement: “Sure, we’ll buy.”

When faced with the potential of a sale, the first instinct of every good engineer is to do exactly what you shouldn’t: keep talking. I proceeded to explain how their CFO was not convinced the previous day, and that maybe he should talk to him before agreeing to a purchase. “Our CFO is in the room right now, “ said the VP of engineering. “We’ll buy. Just send us the contract.”

As I hung up the phone, the excitement of having a first customer was tempered by the reality that not only did I not have a contract to send, but I also did not have a business entity under which to extend it. Since my experiment had been designed for failure, I hadn’t given much thought to what to do when confronted with success. Thus began a new challenge: creating a business entity and on-boarding a first customer.

Starting a company requires a willingness to take risks, work hard, an ability to learn / adapt, and a heavy dose of emotional fortitude. But as I learned from my "failed" experiment, it also requires a little luck.